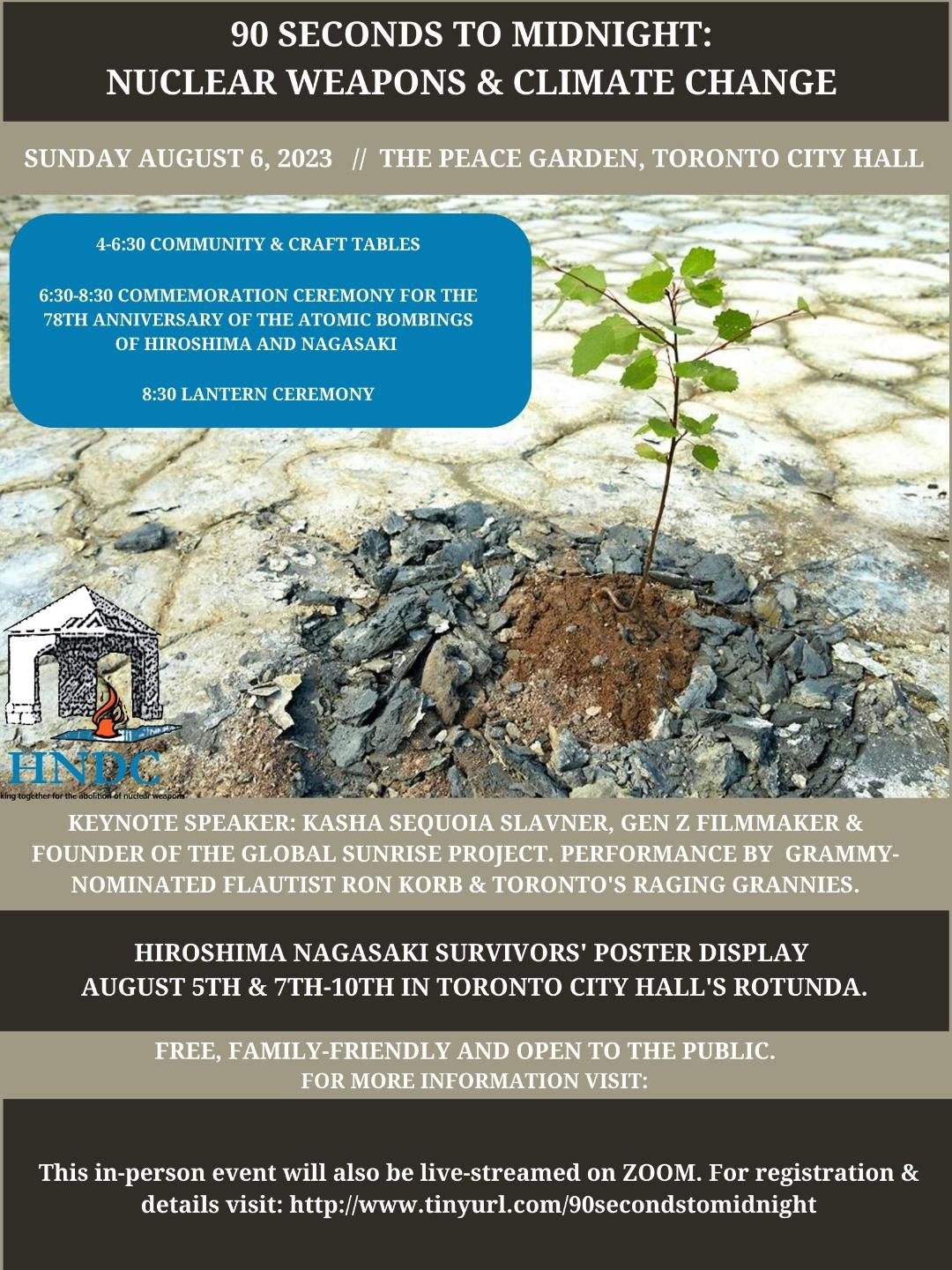 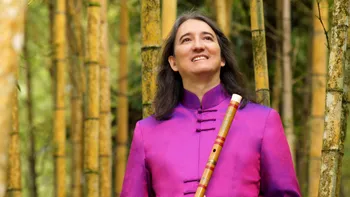 See a sample of the exhibit on our website, and the full presentation at imagearts.ryerson.ca/hiroshima/. Sponsored by the Hiroshima Nagasaki Day Coalition and Ryerson Artspace, curated by Katy McCormick.

This petition was initiated by the Hiroshima Nagasaki Day Coalition, Échec à la Guerre and the Canadian Voice of Women for Peace. It is sponsored by Member of Parliament Alexandre Boulerice of Rosemont—La Petite-Patrie of the New Democratic Party Caucus: https://petitions.ourcommons.ca/en/Petition/Details?Petition=e-3828

The UN Treaty on the Prohibition of Nuclear Weapons has been endorsed by 122 nations, and became international law for more than 51 ratifying States on January 22, 2021. Regrettably, Canada boycotted negotiations in 2017 and has refused to sign or ratify this landmark Treaty.

Nuclear weapons, along with climate change and pandemics, are the greatest threats facing human civilization. An exchange of even 1% of the global arsenal of 13,400 nuclear weapons would kill tens of millions of people. It would plunge the planet into a nuclear winter and result in widespread famine, killing billions more.

The world was not adequately prepared for the Covid-19 pandemic. The International Committee of the Red Cross asserts that it is impossible to prepare for nuclear holocaust. Humanity’s only hope is prevention through the elimination of nuclear weapons.

Canadians have a right to know, and to hear from our national leaders, how nuclear weapons could impact human health, health care systems, the environment, the economy, the global biosphere and the future of life on earth.

The undersigned, therefore, respectfully call upon the Government of Canada to have Parliament debate the Treaty on the Prohibition of Nuclear Weapons and to allow the House of Commons Standing Committee on Foreign Affairs and International Development to hold public hearings on the Treaty and on Canada’s role in advancing global nuclear disarmament. *

* On January 22, 2021, the date the TPNW entred into force, the HNDC co-ordinated a 3-page spread in the Ottawa Hill Times that was endorsed by 110 groups and 330 individuals.  This initiative called upon the Government of Canada to have Parliament debate the TPNW and to allow the House of Commons Standing Committee on Foreign Affairs and International Development to hold public hearings on the Treaty and on Canada’s role in advancing global nuclear disarmament.

April 6, 2021 (Toronto): The threat posed by nuclear weapons is of major concern to Canadians according to a new poll released today by Nanos Research. The poll results show that Canadians are very positive about key solutions the disarmament movement has been advocating and that Canadians are action oriented in responding to the nuclear threat.

The Nanos Research poll was commissioned by the Hiroshima Nagasaki Day Coalition in Toronto, The Simons Foundation Canada in Vancouver, and the Collectif Échec à la guerre in Montreal. Nanos conducted an RDD dual frame (land- and cell-lines) hybrid random telephone and online survey of 1,007 Canadians, 18 years of age or older, between March 27th to 30th, 2021 as part of an omnibus survey. The margin of error for a random survey of 1,007 Canadians is ±3.1 percentage points, 19 times out of 20.

“This is profoundly gratifying to me that Canadian public awareness has been raised so significantly,” stated Setsuko Thurlow, a member of the Hiroshima Nagasaki Day Coalition.

“How have the Bombings of Hiroshima and Nagasaki affected you personally?” 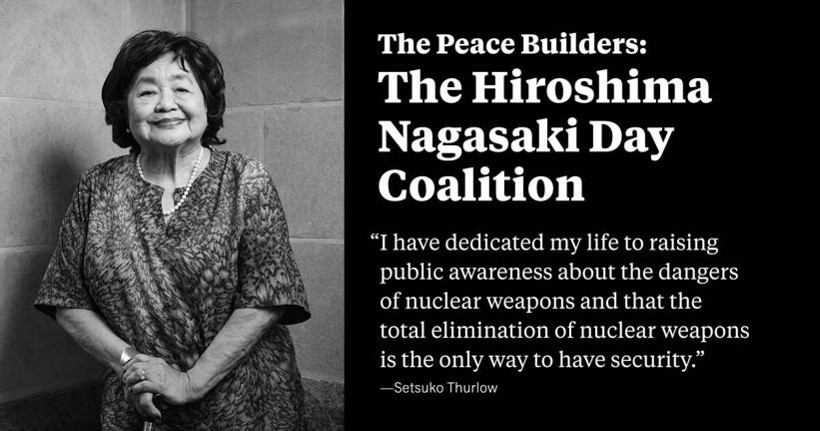 Visit the photographic documentary at:
http://michaelbarker.ca/the-peace-builders-hiroshima-nagasaki-day-coalition/