On this page we present images of our posters for the current and previous editions of the annual Hiroshima-Nagasaki commemorations in Toronto. Where there is additional material -- press packs, ancillary events, or other documentation -- we may also provide links. 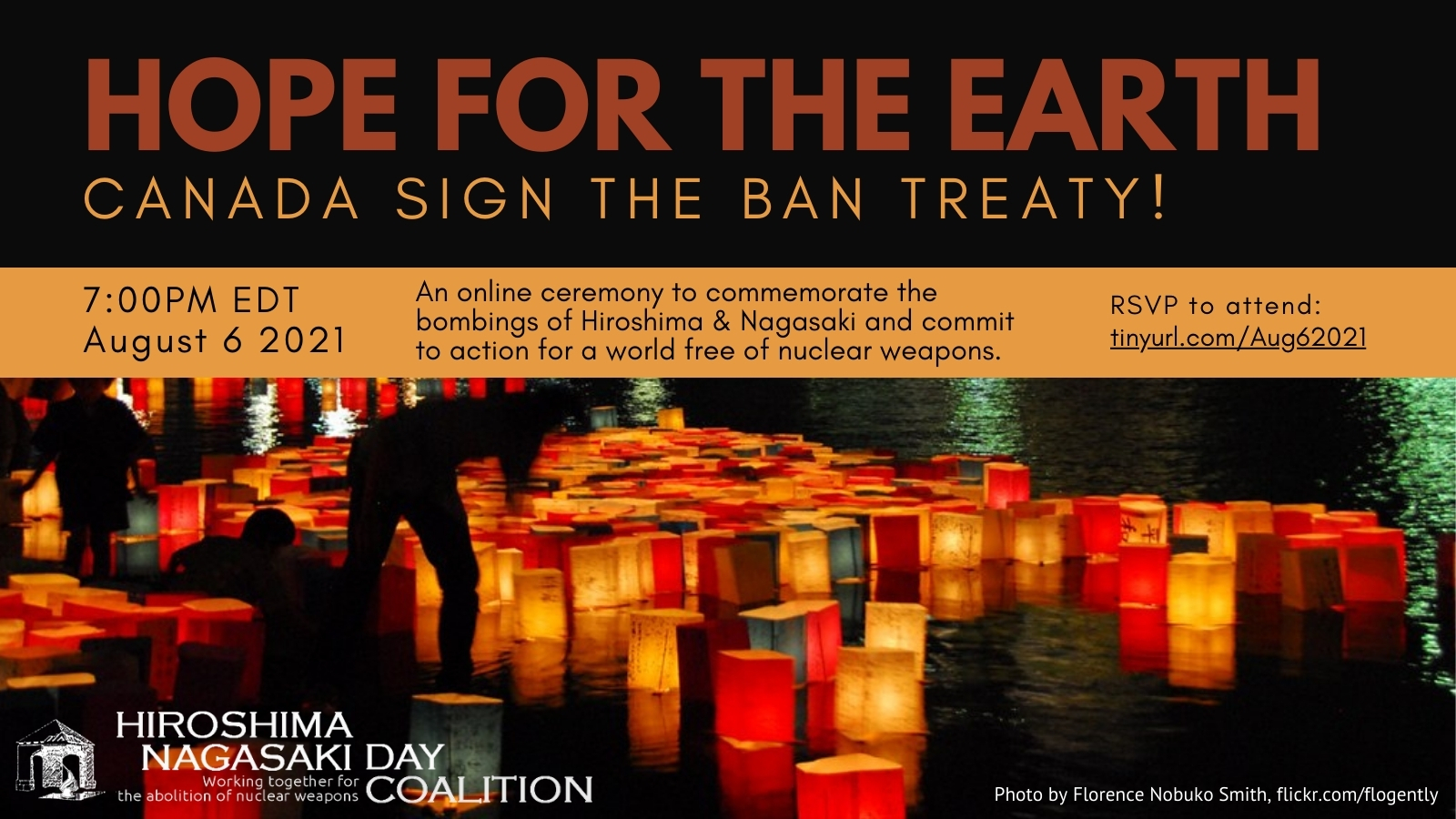 On the evening of August 6, the anniversary of the atomic bombing of Hiroshima, we invite you to attend Hope for the Earth: Canada, Sign the Ban Treaty.

Peace activists and dynamic artists will highlight the importance of Canada's joining the growing number of nations signing the Ban Treaty, and how we can contribute to the elimination of nuclear weapons.This event will include esteemed speakers, musical performances, Mayoral Proclamations and a lantern ceremony.

Speakers and performers include:

Setsuko Thurlow, a Hiroshima survivor and co-recipient of the Nobel Peace Prize on behalf of the International Campaign to Abolish Nuclear Weapons, ICAN, for its work in achieving the 2017 UN nuclear ban treaty.

Ron Korb, a Grammy nominated and multi-award-winning flautist. Playing a wide variety of indigenous woodwinds from around the world, his compositions evoke imagery of diverse cultural traditions.

Erin Hunt, the Program Manager at Mines Action Canada, an expert in humanitarian disarmament, victim assistance, and Canadian disarmament policy, and a contributor to the International Campaign to Abolish Nuclear Weapons.

Nathaniel Erskine-Smith, the Member of Parliament for Beaches-East York and a vocal advocate for the UN Treaty on the Prohibition of Nuclear Weapons and why Canada should sign the Treaty.

To register to attend the Hope for the Earth event online on August 6th, please visit the Action Network's webpage https://actionnetwork.org/events/hopefortheearth and follow the directions.

This event is being hosted by the Hiroshima Nagasaki Day Coalition and World BEYOND War. (Registration info will be shared with both hosts.)

See a sample of the exhibit on our website, and the full presentation at http://imagearts.ryerson.ca/hiroshima/.

“How have the Bombings of Hiroshima and Nagasaki affected you personally?”

Visit the photographic documentary at:
https://michaelbarker.ca/the-peace-builders-hiroshima-nagasaki-day-coalition/

Please watch this video of the 2019 Hiroshima/ Nagasaki commemoration produced by Kyoko Yokoma of Connected Earth.

Setsuko Thurlow and Beatrice Fihn of ICAN
accept the Nobel Peace Prize in Oslo on December 10, 2017.

2 Minutes to Midnight: Time to Ban the Bomb

Image: mural by Tatsuya Tomizawa, made with thousands of hand-folded paper cranes. Photo by Tim Wright

We CAN Abolish Nuclear Weapons!

Free, open to the public and family-friendly

This event is free, open to the public and family-friendly

Rededication of the Peace Garden

Program of the Day 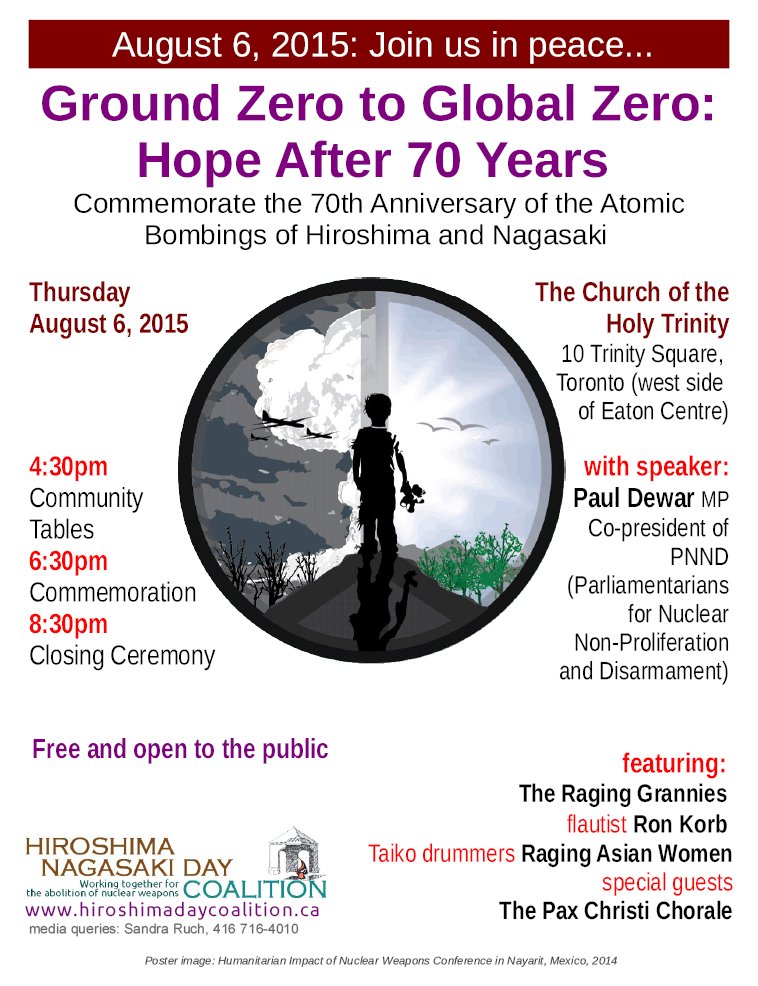 Chernobyl, Fukushima, Darlington and Beyond

The HDC was a sponsor of the April 24, 2012 event "Chernobyl, Fukushima, Darlington and Beyond", organized by Veterans Against Nuclear Arms. Other sponsors included Voice of Women and Science for Peace. See this link for text and audio of Angela Bischoff's keynote speech.

More material on the 2010 archive page

More information on the 2008 event page