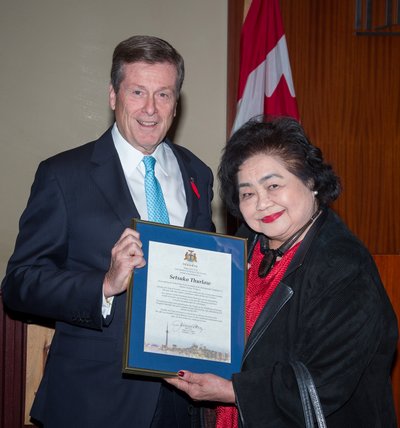 For an article from the Nikkei Voice, see: nikkeivoice.ca/toronto-city-council-honours-setsuko-thurlows-activism

The following day, Councillor Chin Lee moved, seconded by Mayor Tory, that “City Council reaffirm the City of Toronto's position as a nuclear weapons-free zone” and that “City Council request the Board of Health to hold public hearings on the dangers of nuclear weapons and radiation fallout.” This motion passed. See http://www.toronto.ca/legdocs/mmis/2018/hl/bgrd/backgroundfile-111804.pdf.

The Board of Health held its public hearing on the dangers of nuclear weapons and radiation fallout in City Hall on April 16, 2018. The Hiroshima and Nagasaki Day Coalition tabled the Board of Health's 1982 document, "Public Health Consequences of Nuclear Weapons and Nuclear War," which made recommendations, subsequently adopted by Toronto City Council, for a detailed civic policy on the nuclear threat. For this and other original documents from 1982 and 1983, see http://hiroshimadaycoalition.ca/media#top.

The following presentations were made at the April 16, 2018 Toronto Board of Health public hearing:

(For a video link to these presentations see http://nikkeivoice.ca/victory-against-nuclear-weapons-in-toronto/ beginning at the 14:12 minute mark.

Presenter Zach Ruiter urged the Board to investigate the purchase of the GE uranium pellet plant on Landsdown by the U.S.-based nuclear weapons manufactuer BWX Technologies (see his article in NOW: https://nowtoronto.com/news/wmds-in-the-west-end-of-toronto/ . The Board agreed to further investigate the health consequences of this plant.

Following are written submissions to the Toronto Board of Health:

See the notification from Julie Lavertu, Secretary, Board of Health: [file HL.26.1 Letter to Interested Persons].

After receiving these in-person and written submissions, the Toronto Board of Health voted unanimously on April 16, 2018 to recommend to City Council that it “Request the Government of Canada to sign the United Nations Treaty on the Prohibition of Nuclear Weapons” and “Expressed its support for the City of Toronto's reaffirmation of its position as a nuclear weapons-free zone.”

City Council passed the motion requesting the Government of Canada to sign the United Nations Treaty on the Prohibition of Nuclear Weapons on April 24.

For a complete listing of submissions to the Board of Health public hearing, see http://app.toronto.ca/tmmis/viewAgendaItemHistory.do?item=2018.HL26.1